Wrye Bash has been my go-to tool for Oblivion since early 2009. I use it for installing mods, changing the load order, creating a bashed patch, doing ini edits, managing savegames and as a toolbar to launch all other programs I use with Oblivion.

Naturally, I wanted to to the same on Linux.

It is kind of an ongoing battle, I have to admit. Some things are a bit moody and don't work quite as smooth as on Windows. My experience might be a bit special, though, since I mostly mod the game, instead of playing it. I am never happy for long, there is always something to tweak, something to check, so I never just launch the game and be done with it, even on Windows.

Current Events: Wrye Bash is in testing for Python 3

Wrye Bash just recently jumped to Python 3 with the nightly versions 310. The one on nexus at the time of writing this (309) is still Python 2.

I haven't really bothered updating yet, mainly for three reasons:
One, I really don't have the time to break my install and start from scratch right now.
Two, while I don't blame them for it (how could I!), I know there is basically no support if something breaks in wine and a huge update like this has many chances to break.
And three, while I'd love to test it and find bugs, the bugs I find are probably half useless anyway, just because I am using it on wine, so I can't say I feel too bad about sitting back and waiting.

One thing that was strange for me: I had to change the Windows settings in winecfg to "Windows XP" just for Wrye Bash, otherwise it would complain about unknown locale, so if you wanna give it a try, keep that in mind.

All following instructions are still for the 309 or lower versions, not the latest nightlies.

How I set it up

I personally spend more time modding than playing, so I'll leave it at this. If you just wanna set up a working list and then start the game directly, you can change the Executable field back to Oblivion.exe once you are done.

There is a function to open any .exe in that game's wine prefix, but I had mixed results with that. It seems to work for Wrye Bash though.

If you are not using Lutris, just replace the Oblivion.exe in your shell command to launch the game with wine with Mopy/Wrye\ Bash.exe.

* March 2021: I currently have graphical issues with the latest build of Wrye Bash in Lutris' own wine version, and recurring issues when using my system's wine where every few updates something breaks. See more at the end of the page about custom wine versions.

I haven't had time to test in depth, but on first glance these things seem to work either without a problem or with a small workaround:

At one point, I somehow managed to break the dialogue that would appear when asking to confirm an action - like apply an ini tweak. It just wouldn't appear. Reinstall in a fresh wine prefix fixed it and it hasn't happened again.

Lately, Wrye Bash would freeze upon the information dialogue that tells you "your load order has been reverted" if lock load order is selected. Disabling it in bash.ini with bSkipResetTimeNotifications=True fixed that.

I admit it, I leave a trail of broken wine bottles and virtual machines in my wake

I mean dragging packages and esps to reorder them. It freezes the app completely and I need to use the task manager to kill it. Feels just like 2009, before drag & drop was a thing, he. Accidentally drag mouse? Frozen. Kill it.

That also brings me back to what I was doing years ago, before Wrye Bash on Windows stopped crashing all the time:

On the installers tab, I like to move mods with right click -> move to, since those numbers are easy and quick to type. For the mods tab, I rather run BOSS with a custom list that puts all my mods where they belong, or use the Ctrl Up/Down keys.

As mentioned on the general Wrye Bash guide (... I think ...) I prefer BOSS because it puts all the mods back exactly where they were before. LOOT has more general rules, and if a mod is not in conflict with anything, it won't be moved at all, possibly causing my mods to switch position all the time when I edit a lot of them. Again, this is probably a problem someone who just wants to play the game doesn't have and the LOOT masterlist is getting better and better, while BOSS hasn't been updated in a long time and will require manual list entries for a lot of new mods.

I then tried to link my most used apps on Wrye Bash's toolbar. I like launching Tes4Edit, Tes4LodGen, BOSS etc from there. Some apps work fine, others are a bit moody, namely BOSS.

For some reason a while ago xEdit stopped counting down on the "are you sure you want to edit this?" dialogue and I had to enable expert mode in Wrye Bash, so I could skip the whole thing. I have to admit, I am still using an older version of xEdit because I have no patience for the increased load times of 4.x. 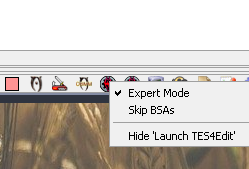 The BOSS icon actually appeared, but launching it from the BOSS icon made everything freeze. Once I linked BOSS to some random app's Icon like MediaMonkey, it launched just fine (and worked, too). I just have to keep "lock load order" off, then, or turn it off before using BOSS.

OBMM was auto detected and lauched successfully from its icon, Nifskope and Tes4LodGen could be linked normally.

Paths are set as they would be in Windows: C:\etc...

If you want to put your tools outside your wine prefix, you need to enter a path with Z:\ ...

Additionally, I did not manage to get any shortcuts to apps placed in the Mopy/Apps folder to appear in the status bar, but I admit, I didn't try very hard.

Some of the dialogue windows generated by Wrye Bash (Bashed Patch built, for example, etc) are emtpy. The app doesn't crash, the Bashed Patch is built correctly, but whatever info would be in those windows isn't visible.

On Windows, Wrye Bash can install directly from archives: zip, rar and 7z.

On Linux, sometimes installing works, sometimes it doesn't. Apparently it is unable to install files into folders that don't exist yet, so if you have a mod that places a file in textures/landscape, but the directory doesn't exist, it will fail.
You can read more about this here.

Just keep in mind, if you run into that problem: Unpacked archives (called projects in Wrye Bash) always installed fine. Just extract them yourself.

The problem I had with wine was that every few updates something would break. I can't just hold the package back for just one game, so Lutris having its own runners (custom versions of wine, actually) was godsend.

This only turned into a problem when suddenly I had graphical issues with those runners; they use a "flat theme" to make it look more modern/more like Win10, but for some reason this stopped working with Wrye Bash. Areas that were supposed to be empty suddenly showed the last thing that was drawn on screen there. This wasn't just ugly, it was also very unhelpful, as clicking on the Bashed Patch once would keep the masterlist of the patch shown at all times etc.

Using wine-staging has the same problem with the same graphical issue.

Additionally, apparently between wine 6.4 and 6.5 there were huge changes to some things, which made some prefixes no longer work at all after the update. And, how could it be different, the only prefix for me that was affected was the Oblivion one.

So I custom built a version of wine-tkg 6.0 with a custom fix for the drag & drop problem. While this was easier than I had thought, this is exactly what I wouldn't wanna see in a guide :D