This guide assumes you know how to install a program, how to locate a directory on your HD, how to move files and how to see file extensions, if needed. This is not a Windows tutorial.

I admit, this is a bit more advanced than the "Beginners" title would suggest.

Introduction to the INI Edits tab

How to apply one of your many ini edits

The Screenshots tab, or: Things you don't need for 100

Some tricks: Lock your load order

Some tricks: Using the BOSS userlist

Some tricks: Esmifying an esp

1) This is probably the most confusing of all Wrye Bash tabs. 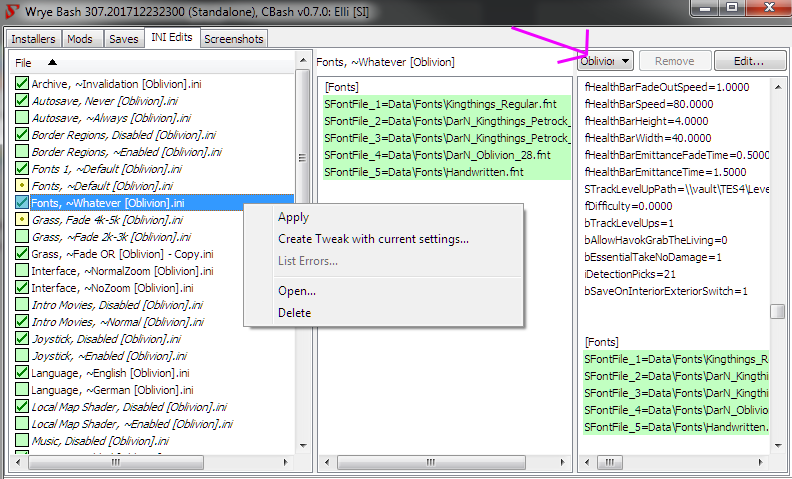 This Tab is used to edit the Oblivion.ini (or other ini files) according to certain presets, so called IniTweaks. The ones written in Italics are Wrye Bash defaults, the rest of them I created myself and placed them in Data\INI Tweaks. Some mods (for example DarNified UI) might bring their own.

2) You can edit more than just the Oblivion.ini with this tool. The pink arrow points at the field where you can select the ini you want to edit. For example, I created a Tweak with more than 100 changed settings for Maskar's Oblivion overhaul. After an update, I can apply it and Wrye Bash will tell me which settings no longer exist and have to be removed from the tweak.

3) A tweak file is just a small ini file that consists of the sections you want to change. For example for this font Tweak, if you open the file Fonts, ~Whatever [Oblivion].ini:

1) In my example picture, applying the highlighted Tweak would change the Font settings of the Oblivion.ini to some of DarNified UI. Applying Fonts, ~Default [Oblivion].ini would reset the fonts to the original ones.

3) If the icon of a tweak is orange, that means the names don't match the currently selected ini. It was probably made for another ini file. The name of that ini file is usually put in brackets in the file name. "Default [Oblivion].ini" would be for Oblivion.ini, while "Customized [Maskar's Oblivion Overhaul].ini" would be for Maskar's Oblivion Overhaul.ini.

4) Some nice ini edits that I barely see mentioned anywhere are:

It removes the yellow-ish background while the menu is open.

As mentioned in the mod Talk with your Hands, it stops the camera from zooming in so far when talking with an NPC.

5) To apply an ini edit, just click into the green square, or right click and select Apply.

Do you need it?

2) Probably still no. It will list bmps in your Oblivion directory and allow you to convert and rename them. That's it. Nothing any other image editor can't do.

1) This is the small bar at the bottom of Wrye Bash.

It is used to launch Oblivion as well as several tools. Additionally, where the arrow points is a settings button.

If in doubt, hover over the icon, you will see the name of the program.

3) You can hide the standard icons by right clicking on them. If you want them back, that where the settings button comes into play, more about that later.

4) Some tools have options that can be accessed through right click. For example, for Tes4Edit you can enable the -IKnowWhatImDoing mode.

1) You can add icons in two ways. Way 1:
A lot of those can be set in the bash.ini. Remember at the beginning when I told you you can keep reading the ini file? That's where you find it. The section [Tool Options] fulfills (almost) all your tool icon wishes. If you want to have a tool appear, you can remove the ; in front of a line and add the right path to the tool like this:

2) And then there is way 2:
In the Oblivion\Mopy directory, there is another one called Apps. If you put in any shortcut to any app it will appear in Wrye Bash's tool bar. You can even put a shortcut to any directory in there, be it your installers, your savegames or your stash of kitty pics.
You can create a shortcut by right clicking onto whatever app/directory you want and selecting "create shortcut", then move it in the apps directory. You can even change the symbol of a shortcut by right clicking it and selecting "properties", then "different symbol".
I am sorry, I don't have English Windows, so I am not 100% sure about those menu names.

3) Icons will appear after you've restarted Wrye Bash. You can sort the icons with drag & drop however you like.

1) The first menu option is all about appearance. You can change colors here, language and which icons you want to see on your status bar.

2) The second menu options here are to backup or restore your Wrye Bash settings. It automatically makes a backup if you update the app. Now I personally never needed to restore them, but I assume it works. Can't go wrong with saving some settings, especially before an update.

3) The third option allows you to disable or enable the different popup warnings.

4) The last option contains a list of allowed and disallowed OBSE plugins. This is important if you've ever clicked on "no" when Wrye Bash asked you if you want to trust an OBSE mod/a dll file. It will remember this and won't allow you to install that particular dll at all, unless you change it here. 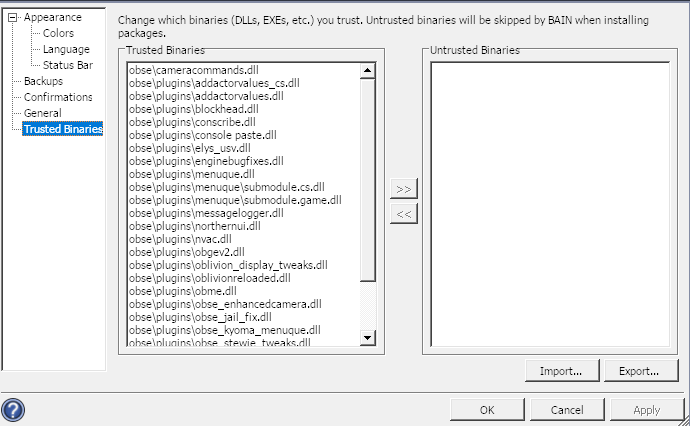 1) Right clicking on the header in the mods tab allows you to select "Lock Load Order". This is nice if you work with other tools, as it prevents any changes to the load order by external tools. To be more precise, it doesn't really prevent them - if Wrye Bash isn't running it isn't doing anything - but it reverts them as soon as you open it again.

If you often edit mods, the notification that the load order has been reset might be very annoying. You can disable that notification by setting bSkipResetTimeNotifications=True in the bash.ini. Don't forget to uncomment it by removing the ;!

2) If you are running BOSS/LOOT through Wrye Bash, you should not have to uncheck this. If, however, you are launching them separately, make sure to uncheck Lock Load Order before, or all your changes will be reverted the second you switch back to Wrye Bash.

3) I think there is no shortcut for LOOT specifically, so you could map it to sboss= in the ini.

1) Now this isn't really about Wrye Bash, but it fits in here anyway. If you move a lot of plugins around and a few of them are not in the BOSS masterlist, it might become annoying putting them back into their place every time you run BOSS. In your BOSS>oblivion directory, there is (if it isn't, then you can create one) a file called userlist.txt. This is used to teach BOSS about plugins you personally want to add. It has a lot of syntax, but we'll just go over the most important here.

This will add the upper mod after the lower mod. The lower mod doesn't even have to be there. BOSS will just put it where the lower mod would be, if it was there.
Note: If the mod you ADDed will be added to the masterlist, your rule will no longer apply.

This will override the masterlist rule of that particular plugin. Maybe you absolutely want to have all interface related mods in one batch or something similar, then this is your command. In this example I want my autosave mod after the Bashed Patch, so it doesn't get merged and I can disable it if I just want to take screenshots without triggering 10 autosaves.
I can do this because I know there are no important changes that will be merged in the patch. I would not recommend to move mods after the bashed patch unless you know exactly what you are doing.

4) You can use ADD and OVERRIDE with AFTER: Modname.esp, BEFORE: Modname.esp, BOTTOM: Group and TOP: Group. Groups are defined in the masterlist.txt with BEGINGROUP and ENDGROUP. Some examples are Base A, Base B, etc... Quests A, Quests B, etc... Pre Bash, Post Bashed Patch.
To be honest, the before/after method is probably more easy to use. Just find a similar mod and smack yours behind it.

5) It is possible to edit user rules through the BossGUI. I rather open a text file and add two small lines than deal with a user interface, so my experience is lacking at best. Pressing Create New Rule requires you to have a rule selected and will create a copy of that rule and put it at the end of the list. Then you can enter the name of the plugin to be sorted and the rule that should apply to it. Be aware that selecting before and after seems to be inverted: Selecting before actually puts the rule in after and vice versa. You can check the created rule in the list and change it again if necessary.
Actually I never bothered with the BossGUI. I just click the BOSS.exe to sort, and read the log in my browser after, and edit my userlist manually.

1) If you want to work with more than one esp in the CS, you'll soon notice that one esp cannot depend on another esp, at least not with Bethesda tools. An esp can only use stuff from an esm. Or... from an esmified esp!
The status esm/esp isn't determined by the file extension, but rather by a bit in the file itself. Wrye Bash can flip that bit. Right click on an esp, click Esmify Self and it will behave like an esm for the CS. You can load it with another file and make a mod dependent on it. Just don't forget to Espify Self when you're done.
Mods that change anything about worldspaces will cause all ground to disappear if loaded as esm. Fun times!

Please note that I think it's not that easy in later games, so I can't give advice for anything newer than Oblivion. I believe those games have some additional information in the header to determine if it's an esp or esm, not only this one flag. I don't know if this works as well for those games.

2) After espifying, you might need to adjust your load order again.

3) You might want to check out the Construction Set Extender (CSE) which makes the CS much more nicer to work with and also allows to use esp files as master, making all the esmify stuff obsolete.